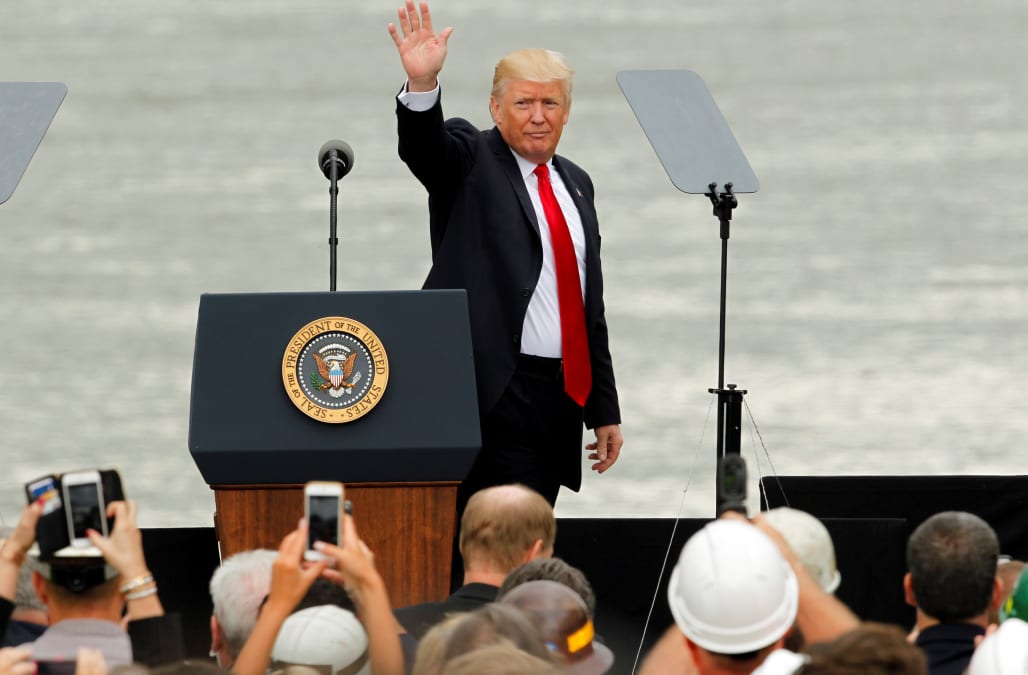 To provide contrast to what I’m about to write, here’s an hilariously dire article from the (failing) Times:

President Trump finally took a much needed break from what he humorously called the “Washington Swamp” to deliver a “Make America Great Again” speech that would serve as a recap on what he’s done so far, and what plans he has for the near future. Unlike the inauguration, the media couldn’t hide the number of attendees from this live-streamed event. The president managed to pack the venue in Cedar Rapids, as thousands of Iowan Trump supporters came to hear their president speak. Mainstream outlets have all been mocking the length of Trump’s speech, which was over an hour long. To me, this just shows that the man knows how to publicly speak and hold the attention of his devout fan base, something former president Obama famously failed at without the aide of a prompter. Trump covered a variety of topics, including immigration, health care, Tuesday’s special elections, and more. Let’s take a look.

Still holding to his campaign promises, Trump talked about a new addition to his yet to be built border wall he plans to put on America’s southern border. His new plan is to cover the border wall with solar panels, which as he put it, would allow the wall to fund itself due to the power it would provide the surrounding area. Critics pointed out that Trump has no solid statistics to prove this would make the wall profitable, but considering no clean energy was built with profits in mind, we can forgive him on this one. Also on immigration, and almost more importantly, Trump announced that he would be cracking down on how benefits were given to immigrants. The idea is to no longer admit immigrants who will become “public charges”. This means that if an immigrant has no way to financially support themselves within five years of entering the U.S., they will be denied entry to the U.S. in the first place. On top of that, current immigrants cannot begin claiming social benefits like welfare until they’ve been in the U.S. for five years. Again, critics have been quick to point out that these are both already legal requirements put in by presidents (W.) Bush and Clinton, but what they fail to take note of is that these laws have been completely ignored. Just like how President Trump is finally using ICE to deport illegal immigrants who have been residing in the nation illegally, he aims to start enforcing these social program restrictions. I find this move brilliant, as the main criticism conservatives have with welfare isn’t that single mothers or recently laid-off trade workers use them, but rather that we allow millions (yes millions) of illegal migrants to come into the nation and immediately live off of social benefits alone, without ever working or paying taxes to help pay for these benefits. While harsher steps could definitely be taken, I think this is a great first step by the President in the right direction on immigration.

In terms of health care, the president didn’t say a lot, from which we can gather a lot. It is noted that Trump has called the current status of the health plan “mean” and has called for the GOP to have a little more heart when they plan it out. Trump used his typical bravado here, saying that he promises that Americans are going to “love” the new healthcare bill once it goes public, and that it’s just a matter of time before it goes public. He also pointed out that despite the GOP having a majority in congress, they still need a few Democrats to vote on the bill to get it passed, in which he jokingly added, “if we could only get a few of them…  it’d be so easy and beautiful”. More critical of the health care bill is Sen. Rand Paul, who is using the opaqueness Congress is showing with this bill as a way to promote his second attempt at getting a bill transparency law passed. All this would do is legally require congressmen to read all of a bill before signing it, and also having to make all the elements and attachments of the bill public. Sen. Rand’s bill failed horribly last time it was proposed (go figure) but here’s hoping the age of transparency promised by Trump is truly upon us. Either way, Sen. Rand shows that he is one of the few honest politicians in Washington yet again.

Looking back on the past, Trump talked about all the good he has managed to accomplish during his early presidency, which I think is a great move on his part. It’s easy to have missed a lot of what Trump accomplished when most people view the news through the corrupt filter of cable news or liberal owned social media. Trump reminded Americans how prosperous the economy is, how he fought against the EU to get the U.S. out of the damaging Paris Climate Accords, voted down TPP and more. Looking forward to the future, Trump promised to pump a trillion dollars into rebuilding America’s infrastructure* as well as working on rolling back regulations on business and trade to help stimulate the American economy. These are exactly the things he promised he would work on as president and so far he’s been delivering on a lot of them, way more so than president’s typically do. This gets into why I think this speech was an excellent move on Trump’s part.

As I said earlier, it’s easy for Americans to get caught up in the negative mire of fake news that declare we have a Russian puppet lunatic as president. When the media spends half their time making up fake stories of how Trump and Russia stole the election and the other half making every Trump decision seem apocalyptic, it’s easy to miss out on what these decisions actually are. It’s also tough to remember why Trump’s fans liked him as much as they do when the only time you see the president is when he’s sitting in the oval office or in some foreign nation. Seeing Trump standing in front of thousands, doing his Trump thing, it reminded a lot of people why they voted for him. The way he was able to put all of his actions in such digestible terms, how he managed to blow off the months of criticism by calling Democrats “obstructionists” and frauds, how he mischievously smiled as left-wing protesters were escorted out of the stadium for trying to disrupt the speech, all of it served as a reminder to his fan base why Donald Trump won the presidency beyond just not being Hillary Clinton.

If Trump can keep this support going the upcoming months, he can win in 2020 if he chooses to run again. Just yesterday, we saw Republicans win 5 house seats in special elections, most notably in Georgia. As I said in yesterday’s blog, people aren’t nearly as upset with Trump and conservatives as the media wants you to think. If Trump was given a fair shake, people would be even more supportive of him. Trumpies needed to see the President speak tonight, if not to act as a morale boost after months of Islamic terror attacks, domestic terror attacks, and media stupidity. It was a solid first five months Mr. President, time to make some serious progress in the ones to come.

*I love how John Oliver spent a whole episode talking about how important it is to fix America’s crumbling infrastructure, yet fails to applaud Trump on his promise to take care of this issue. Further proof of media bias. Also further proof that Trump isn’t “right-wing” as raising billions of tax dollars to pay for national infrastructure is nowhere near aligned with the small government ideology of conservatives.