Here’s the viral video that came out today exposing CNN. Surprisingly made #1 Trending:

I’ve come to develop a philosophy in my life, due to something I’ve noticed about human psychology.

“It doesn’t matter if you’re right, if everybody else is wrong.”

A related philosophy is the notion of being so far ahead of a curve that you end up being behind it. There have been countless times where I was certain I was correct, I had the facts, I had the statistics, I had physical evidence. Despite all of this, people don’t accept that you’re correct… until they do. By the time they come around though, there’s no satisfaction in that shallow victory. I’ve noticed an increase of this behavior in my generation, as people slide further into bias confirming bubbles. This was most clear in the 2016 election, where I was literally the only person at the University of Texas that I knew who voted for Donald Trump. Everybody else voted for Hillary, Stein, Johnson, or abstained from voting because their boy Bernie got “robbed’. No matter how much I warned people that polls weren’t reliable, that there’s a “Shy Tory” effect in politics, or that Trump was popular with working America in a way people didn’t realize, nobody believed me until televisions all over Austin physically said Trump had won the presidency. The tears that followed were tasty, but worrying. People genuinely did live in their own little constructed realities, and social media and big name personalities make those bubbles so bulletproof nothing can pop them. Aside from the election, I’ve seen this happen with Bitcoin, sporting events, awards shows, and now the Trump/Russia stories. I give this backstory with today’s blog to contextualize how unsatisfied I am with James O’Keefe’s breaking story on CNN.

In case you somehow missed it, the YouTube channel “Veritavisuals” put out a hidden camera video that contained a conversation between the channel’s host O’Keefe and a supervising producer at CNN. The footage contains the producer admitting that Trump has been great for CNN’s ratings as they are constantly slandering him. He also admits that the entire Russia narrative isn’t a real concern to CNN, that they’re merely pushing it for the ratings, and that even if Russia did hack the election it wouldn’t matter because the U.S. has probably hacked literally every other global election since WWII. For people on the right who are new to this, the video was music to their ears. Finally, from the horse’s mouth, CNN admitted that the Trump narrative is purely fiction, that CNN is clickbaiting the American public in hating the president, and most of all, ethics in journalism is something the executives at CNN don’t care about. For me, and many other people who’ve known this since day one without a YouTube clip exposing it, the video was very much a “water is wet” situation. It changes nothing, and it will change nothing, and here’s why. 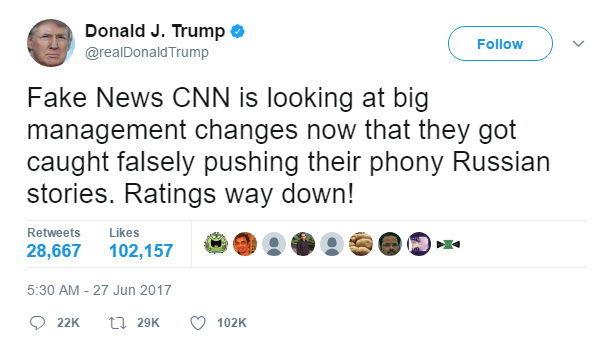 To tie it back to the beginning of my blog, it doesn’t matter if you’re right if no one else believes you. President Trump stood on stage his first weeks in office and called CNN “fake news”. People in the center got a good laugh and people on the left screeched, “Hitler” as BuzzFeed told them 35 Neat Ways Trump Hating the Press Makes Him a Nazi. For those on the right though, it was refreshing hearing a president calling the media for what they were. Fake. If you honestly think that Fox News or NBC or CNN has your best interest in heart, you have to be a fool. There’s no such thing as a real gatekeeper of information, especially in the 21st century where digital media allows you to view the world in ways we never could. To really think that a company whose sole purpose is to turn a profit is also a company that will produce writers that will create content that doesn’t cater to the audience that follows them is foolish. Individuals have ethics, moral integrity, and a guiding compass that points them in the right way to do handle themselves. Businesses exist to make a profit. That’s it. This is why I don’t blame CNN in the way a lot of people are right now. Read my previous blogs and I’ve pointed out that everything that mainstream media pushes is just to cater to a fan-base and make a profit, not to objectively tell the news. This ties into a bigger problem than just vested monetary interest though, it ties into the very practice of journalism itself.

I’ve taken journalism courses in university, and the most shocking thing I learned from my professors was that journalists don’t believe the journalist’s job is to report facts. What I learned from former editors from big publications was that a journalist’s job is to learn about an event, and then filter that information to the public in the way that best serves them. This blew me back, it was like learning Santa wasn’t real. Something I assumed was the major tenant of the profession is instead the opposite. UT isn’t a tiny backwater school either, my lecture halls were full of hundreds of students in these introductory courses. That means that hundreds of students were getting trained and geared every semester to believe that there is no room in modern journalism to simply tell the truth. Instead, the role of journalism is to tell the people what to think. I’m eternally grateful that I learned this, as I learned to set my expectations from then on correctly. The more I think about it, it’s hard for me to not agree with this viewpoint either.

I’ve seen time after time these recent months where the same event or news story will be told in so many different spins across different media sites. Trump and the Paris Climate Accords could be a messiah moment for Fox or InfoWars and a world killing moment to CNN. The people who hold the keys to the world have made fact subjective, and if that’s the case, how are you supposed to report on it objectively? Even if you tried your hardest, the very act of you reporting on an event nowadays requires you to paint it with your own worldview. It’s impossible to escape. Those who fight it don’t come off as objective, but rather fail and fall into obscurity while those who embrace the bias succeed. This might seem like a pessimistic view on the fight for factual objectivity, but at the end of the day, I’ve seen multiple friends tweet that they don’t believe the footage of the CNN producer. They think it’s faked, they still believe Trump and Russia are colluding, and none of them have even noticed that Bernie Sanders and his wife are under investigation for bank fraud. As tempted as I am to argue with them, to try and correct them, to present the facts to them, I recognize it’s pointless. They won’t believe me… until they do. Once they do, what’s the point? Well…