We live in such a politically charged era that not having a political party and ideology that you align with is basically social suicide, especially on a college campus. In America, thanks to our two party system, most people fall into a limited number of camps, typically based off their age, race, religion, and gender. For example, it’s safe to assume that a college aged white female probably found herself “Feeling the Bern” during the primary season last year and then quickly shifted to shouting “I’m with Her!” once Clinton snatched the Democratic bid. Of course, there’s going to be outliers in this, there always are, but stereotypes exist for a reason. It’s also not an insulting thing to fit so neatly into a political demographic, the political parties have millions of special interest dollars going into them to create a platform that specifically appeals to your group, whether it be elderly, immigrant, or rural. As mentioned before, America really only has a two party political system, the Republicans and the Democrats. Every other political group, no matter how large or small is then lumped into a third category, “third party”. Everybody thought that last year’s election was going to be the renewal of the third party candidates, but it really wasn’t. To keep it simple, what did the Libertarian or Green parties have that the GOP or Dems didn’t? Being political outsiders? Nope, that was Trump. Being environmentally concerned? Nope that was Hillary. Overhauling government spending or avoiding bad trade deals? Nope, again, Trump. 2016 wasn’t the year of the third party, because third parties don’t offer anything to the American system in their current form, and here’s why.

Something that I’ve always taken offense to is how often people identify me as a Libertarian. When older people in my life like my parents or teachers say that to me, it feels as if they’re implying, “We’re conservatives, you’re a libertarian”, meaning that my age or more anti-authoritarian sentiments separate me from being part of the actual political establishment. Even worse is when my peers identify me as such, because they say the word Libertarian with the same disgust I hear in their voice when they talk about Trump or Ayn Rand, as if they’ve been trained by years of conditioning that those are somehow dirty words. The comical identification, and the one I sympathize with, are when actual Libertarians in my life try to convince me that I’m one and don’t realize it, as if I need to come out of the political closet. I understand their confusion, they hear me complain about the two establishment parties, they hear me call for tax reform and the destruction of social programs, and they hear me adamantly defend constitutional freedoms such as freedom of speech and the right to bear arms.

I’d like to see a Gary Johnson supporter welcome Senator Cruz into his ranks and recognize that he has a lot of shared baseline beliefs, but he won’t, saying that Cruz is one of those “crazy Christian conservatives”. To further prove my point, I’ve had several friends take political spectrum tests and find themselves in confusion after being identified as anarcho-communists or social libertarians. “How could this be, I study Marx and love the Scandinavian countries?”, they ask, disgusted to think they’re in the same political hemisphere as Dr. Ron Paul. This boils down the largest problem in America and abroad, people don’t understand the difference between Libertarian, and libertarian. Honestly, this can be applied to any of the political ideologies, there’s a huge difference between the lowercase and uppercase form. For example, Republican is the right-center American political party comprised of hawkish, NRA-supported old white men like John McCain and Paul Ryan. In contrast, a republican is simply somebody that supports a political system in which educated electors choose those that politically represent a nation’s citizens. The same can be said for libertarianism. I think that libertarianism is a beautiful thing, and I agree with many of its tendencies, having read a lot of work from its prominent scholars on both sides of the economic spectrum. Libertarianism is not a matter of left or right, but rather a matter of authority or individual sovereignty. That’s what the first debates were in American political history, you had authoritarian federalists like Alexander Hamilton and John Adams, who wanted massive expansion of federal power and wanted to model the nation after that of Britain’s parliament. In opposition were anti-Federalists, and later Democratic-Republicans like Thomas Jefferson who wanted a government so small you could, “drown it in a bathtub”, leaving the average citizen free to be masters of their own domain. These thinkers fell in the realm of classical liberalism, desiring a moral and well educated society that could care for themselves and thus would receive buckets and buckets of liberty. Meanwhile, big government authoritarians like FDR saw liberty as the poorest citizen’s ability to access healthcare and upper education. There’s of course benefits to both sides, but it’s clear that this route is far more important and large scale than that of the current day left/right debate. Even if you identify as a staunch Neo-Con or a free loving socialist, I think it’s worth your time to read Rothbard and Hayek and Mises to see what opponents to your ideology believed in incredibly well thought out arguments. This can be seen on the large scale in the respect the Pauls (Ron and his son Rand) receive from the rational members of the right and left. Both are libertarians who had to work inside the two party system, roosting inside the Republican party, but still managed to spread their small government and anti-aggressive policies through Congress. 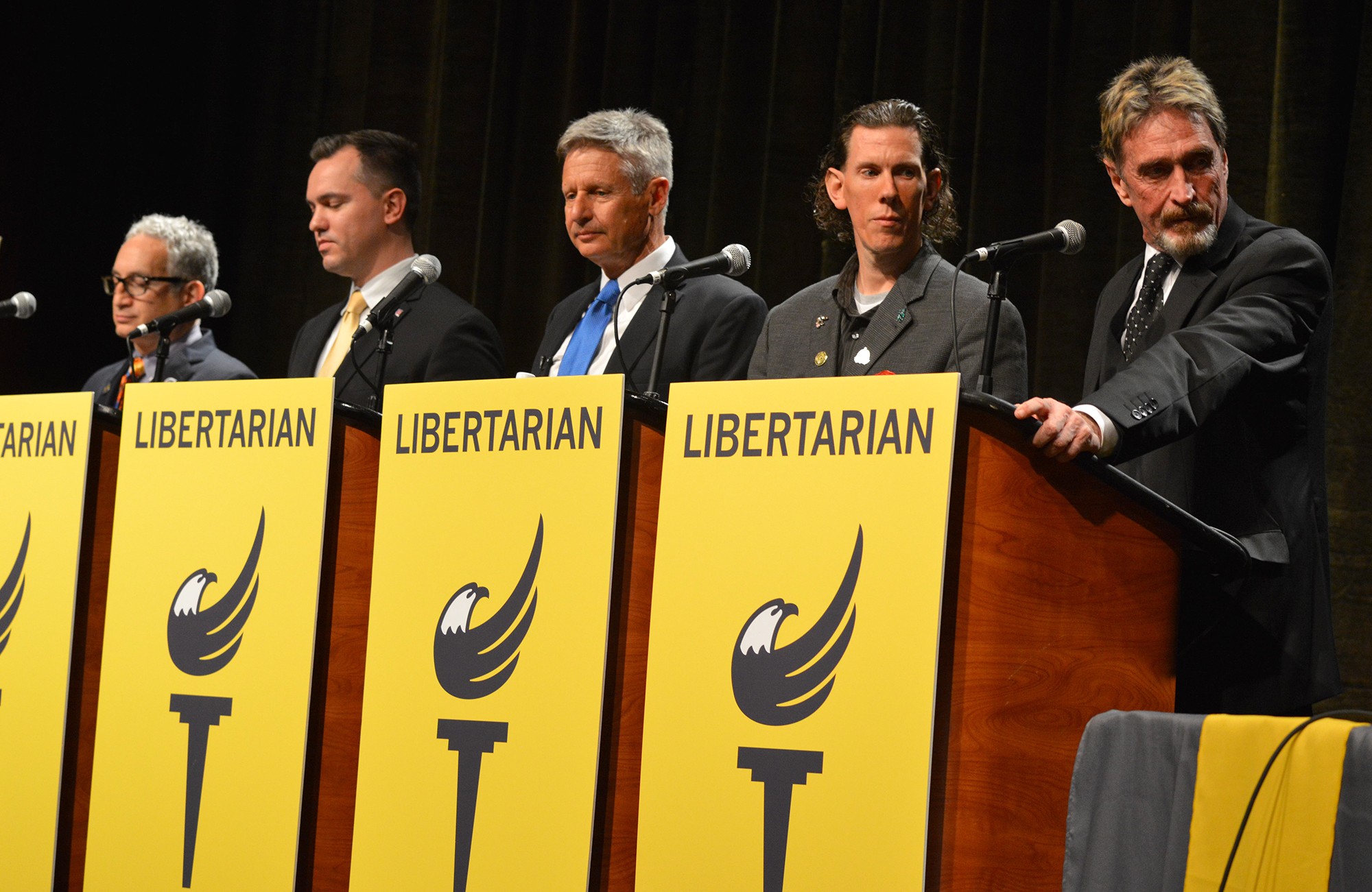 In contrast to libertarian thought is the Libertarian Party, which to be frank is a hot mess. Comprised of America’s political weirdos, the Libertarian Party proudly identifies itself as “fiscally conservative” yet “socially liberal”, which is the biggest case of not taking a stance I’ve ever seen from an American political party. The issue with the Libertarians, and the reason they never manage to gain any traction is that they isolate themselves by not being good enough in any sense. Socially, they differ from their Republican cousins by being pro-marijuana and pro-gay marriage. Financially, they’re pro small business and anti-taxes. This was a big draw for many young white people who grew up in states like Texas, yet didn’t have the same values as their old, conservative parents, while still understanding the value of a hard earned dollar. The Libertarians are a disgrace because not only do they lack a solid platform, but they also have a clown car of people representing them. Gary Johnson, for example, was the Libertarian candidate for president last year. He was a great Republican governor who performed his duties well, and that’s about it. In no way did it qualify him for president. In no way was he truly small government or “libertarian” other than being a self-professed pothead and not having a clue about foreign affairs. Also in the Libertarian side was John McAfee, the tech billionaire who just months before running, was essentially running a militia compound in Belize before having to escape after being charged with the murder of his neighbors. Sure, there are some awesome thinkers and people in the Libertarian Party. Minarchists like Austin Peterson and Bill Weld truly represent libertarian values in a respectful way, but the issue is that behavior doesn’t win them elections, nor does it gain them political traction in American politics.

I guess my hatred for the American Libertarian party is that it could be so much more, yet it falls flat time after time.

I see it less as an anti-authoritarian movement, and rather as a place for old Republicans who like weed and guns to seek refuge after their careers dry up.

As America swings super hard on the socially liberal spectrum, the incentives to joining the libertarians as a conservative dry up, as well as the reasons for liberals to jump ship to a new party, especially when they view their side as the “resistance”. I’m not a Libertarian because of my policy beliefs and the party’s incredibly stunted political progress. I am libertarian though, somebody who loathes government power and really extreme authority of any sort. I believe in access to actual quality education (not state run) that will allow a generation of financially responsible, socially moral (neither progressive nor conservative) people to arise, who can bask in all the privileges and rights afforded to them by being American, such as their right to bear arms. I love these quickly fading affordances because I not only think that they’re the best system to live in, but also because they’re the most uniquely American political rights to exist. America really was the great experiment, and if money wasn’t all corrupting and if people weren’t so quick to trade liberty for security and leisure, we really could be living in a more Utopian society. That being said, there’s still time to fix things. Trump is president, and that means that anybody can get in that White House. The times are a-changing, and us youngins are tired of seeing Uncle Sam do nothing but drop bombs and stuff his pockets with money. Whichever ideology wins out, I only see the political body getting more anti-authoritarian, which means yes, there’s going to be a lot more libertarians running around, whether they realize it or not. Let’s just all be grateful that we can still have diversity of thought in this nation without going to jail for it (Britain) or getting culturally silenced for it (Sweden). If you’re interested into seeing where you’d fall in the libertarian spectrum, take my anarchist quiz to see where you align. You might find out that you don’t actually line up with the state as much as you thought you did. Whatever the case, stay aware, do your research, and let’s start fixing this nation, because it really is worth saving.

2 thoughts on “Why I’m Not a Libertarian”