Here’s the childish article CNN put out on Trump’s GIF:

I was scanning the news today, and a salacious headline caught my eye from everyone’s favorite news site, CNN. The article was titled, “White House stays silent on anti-Semitic connection of Trump’s anti-CNN video”. At first, I was worried that Trump had recently shared something anti-Semitic or offensive that I wasn’t aware, but after a quick search I realized that the article was referring to the hilarious anti-CNN GIF that President Trump shared of himself. After reading CNN’s article, I discovered that their issue with Trump’s action is that the supposed creator of the infamous GIF, a rep-pilled Reddit troll, has a bunch of edgy and offensive posts on his account. CNN tried to get Trump and the White House to apologize for this coincidence, somehow trying to hold the POTUS accountable for posting a meme. Not only is this emblematic of the smear culture that comprises modern journalism, but it also shows how much of a dinosaur old media really is.

To try and hold the president accountable for a meme is idiotic on multiple fronts. First off, CNN has been trying to claim that Trump’s post was inciting violence and beneath the station of the president. As I mentioned with his previous Twitter drama, Trump’s use of social media is what makes him appealing to the masses and keeps a constant dialogue with the American people, humanizing him and the office he holds. This obviously doesn’t benefit the political elite and the media class, as they’ve established for themselves an empire this past century on the very notion that politicians and journalists are somehow better than the average person, promoting dynasties and gated information over the open and every-man style that was originally intended for America. Another thing that CNN is trying to pin on Trump is that he somehow needs to vet everything that he shares on the internet. This is horrible logic, as it requires something that’s borderline impossible to do on the internet, find the source. I love that CNN, who has been getting in trouble for posting articles with no sources or proof of anything are getting mad at the president for not searching up who actually created the GIF he was sharing. This also somehow implies that people actually care about who created an internet meme before they post it, because it didn’t matter in the past. Think about the strife the creator of Pepe the Frog faced when his frog comic was hijacked as a right wing meme, only to see an ironic religious cult based around said frog emerge that claims the cartoon helped win Trump the presidency. That creator doesn’t like Trump or the Right at all, yet had to watch Hillary Clinton call it hate speech and forbid her follows from using said frog memes. I don’t understand now how this logic carries over, or if it even matters (it doesn’t). 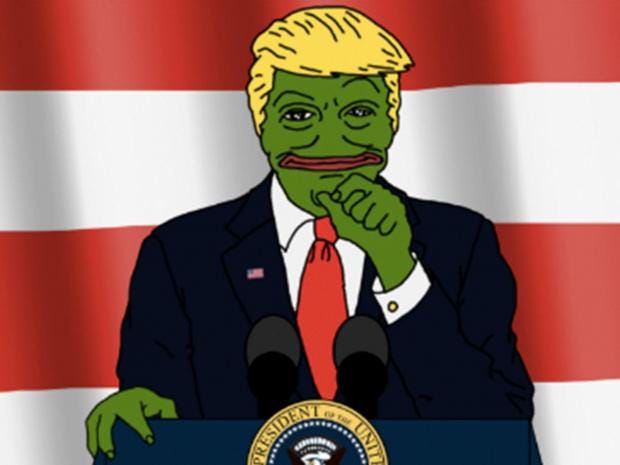 What’s even more humiliating is that the article makes leaps of logic, saying that since the creator has posted edgy memes on his Reddit account, that he then is a bigot and that Trump supports it. The article cites someone from the Anti-Defamation League implying that just because there are people who like Donald Trump, that Donald Trump is then just as bad as his worst supporter. All together, CNN’s article is incredibly sad. It feels like somebody drowning, desperately trying to grab and bring down anyone else near them. With CNN gaining all the heat they have lately from James O’Keefe’s undercover videos this past week, it’s obvious they’re just trying their best to deflect. Obviously, it won’t work, O’Keefe’s videos have been the best trending videos on YouTube all week, and no matter how hard they try CNN can’t escape the hatred they’re going to receive now that they’ve been publicly exposed. The important takeaway is to not buy into the snake oil these fake news sites are spewing in their death throes. It’s not worth our time to read their final words before we see their ratings plummet just like Megyn Kelly saw after Alex Jones exposed her. We all need to keep consuming honest, factual content, and not let the puppet masters behind media to manipulate the people’s minds more than they already are. The fate of our nation depends on it.