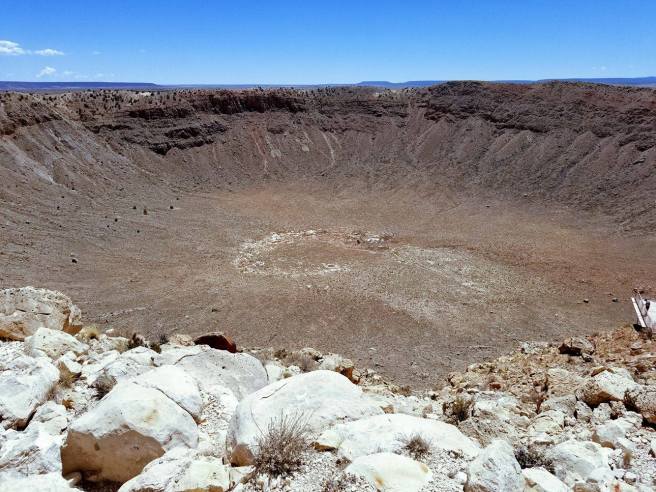 Today I wanted to avoid politics and instead do a sort of travel blog. My girlfriend Emily is currently in town visiting me (we’re long distance for a ⅓ of the year) and my family decided to show her around the grand old state of Arizona. For today’s journey, we showed her Sedona, Jerome, and the massive Meteor Crater which is the, “best preserved meteor crater on Earth”. We had only planned to go to the Meteor Crater, but bad traffic and a couple detours ended up taking us all over Arizona. Although initially annoying, this ended up being a great detour, as we saw some beautiful landscape and towns, and ended up seeing the value of taking the road less traveled by.

After driving three hours, we all arrived at the Meteor Crater, which was supposed to be our sole destination on this trip. To clear up confusion for anyone, the Meteor Crater is also called the Barringer Crater, and the reason it’s called the “meteor” crater is because craters are named after the city or town they are located by. The Arizonan town nearest the crater was named “Meteor” after the long existing crater, thus the giant impact crater is called “The Meteor Crater”. All clear? Cool.

Seeing the crater was actually a really cool experience. When everybody stopped talking, we realized the dead silence that the location really had. After looking through a telescope and seeing how zoomed in one had to be to make a human even visible, I was blown away by the scale of impact. What makes it insane is that the actual meteor that struck wasn’t that big when you think about it, it just managed to be dense enough and strike at the right angle and time to rip a massive hole into the Earth. Harrowing stuff when you think about how many times the Earth has gotten struck in the past, and how short of a time we’ve really been here. It surely didn’t turn me into a nihilist or anything, but seeing the scale of this crater was a really good wake up call to put life into scale.

On top of the crater, there was a pretty sweet museum at the site, including old meteor pieces and dinosaur fragments they’ve found in the area. Turns out this massive crater is privately owned by the Barringer family, and they own the rights to everything inside and around it. They’ve been digging up bits of dinosaur, space rock, and cool geological features for years now.

On top of all of that, there was also a small astronaut museum portion at the crater (probably because of the connection between space and the meteor) and there were some cool sites there for space junkies like Emily and I. There was a capsule, a hall of fame wall, some sweet videos, and other exhibits. 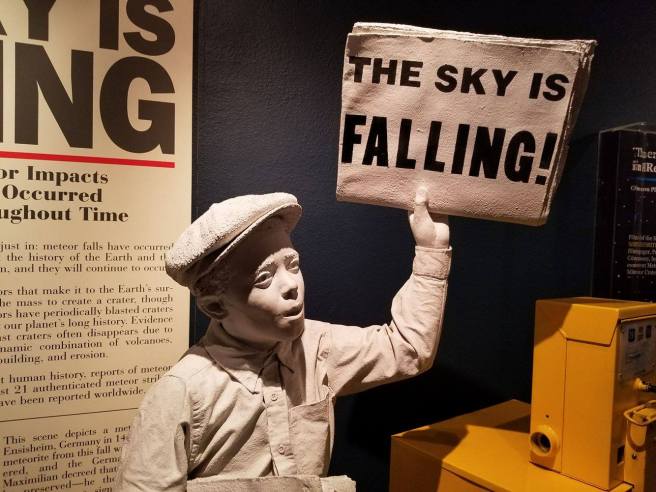 Overall, seeing the crater was a great experience, and made me realize how much fun a family can have at something that others might find strange. I mean, we did spend money and drive hours to see a giant hole in the ground and some old rocks, but it was more than that. We all appreciated the scale of this ancient collision, and what we managed to learn from it since we first started doing serious research on it. Excavations into meteor craters were an important part of the research we did globally on space the past century. If you ever find yourself in Arizona, be sure to check it out.

Due to crazy wildfires that have been going on in Arizona, we had to detour off the highway and start taking the scenic route. I’m so glad we did, because I was able to show Emily, who’s never been west of Texas, the beautiful side of Arizona. Typically I think of Arizona in a negative light, remembering only Phoenix, and dreading the extreme heat and lack of people my age staying to draw a good entertainment scene to the area. Driving through the cities of Jerome and Arizona though, I was stunned by how much natural beauty the state possessed. Driving through Flagstaff and Sedona, I saw so much desert green and gorgeous mountain scapes, that I almost wanted to put off the long road trip ahead of us and just stare at the scenery all day. 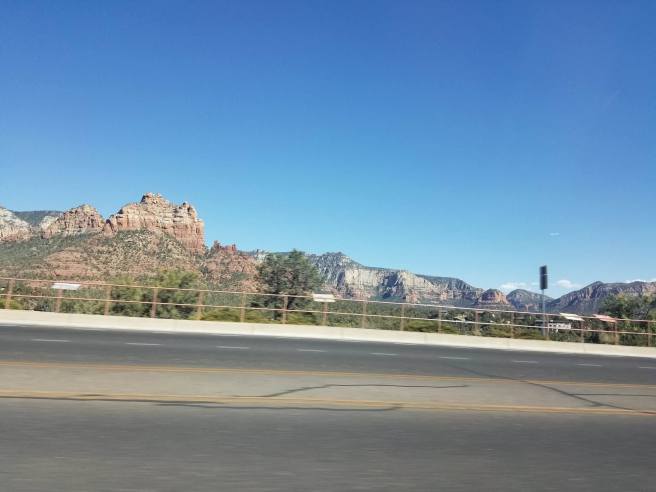 Seeing all this made me realize that I really do enjoy being from the desert (I’m from Nevada) and that it’s nice to explore the places I think of as home every once in awhile. I do plan on going back through these areas, and possibly exploring the eateries and natural locations that require a closer look.

When I woke up this morning, I didn’t expect to get so much out of my 4th of July. I adore America, and I’m so happy that I get to call this nation my home. I constantly get caught up in the bustle of politics, and worry daily about the safety and future of the country my generation is going to be inheriting. That being said, going out and exploring the landscapes and visiting the sites gave me a new appreciation for American beauty that a phone screen or textbook could never show me. I can’t recommend this enough, whatever state, city, or town you live in, hop in a car and go explore. I feel like we forget how big and beautiful this nation really is, and what we’re all fighting for, whether it’s verbally, physically, emotionally, or spiritually. It’s worth taking it slow, trust me. Thanks for taking a travel break with me, I’m sure I’ll be back to politics soon. Happy 4th of July everyone!