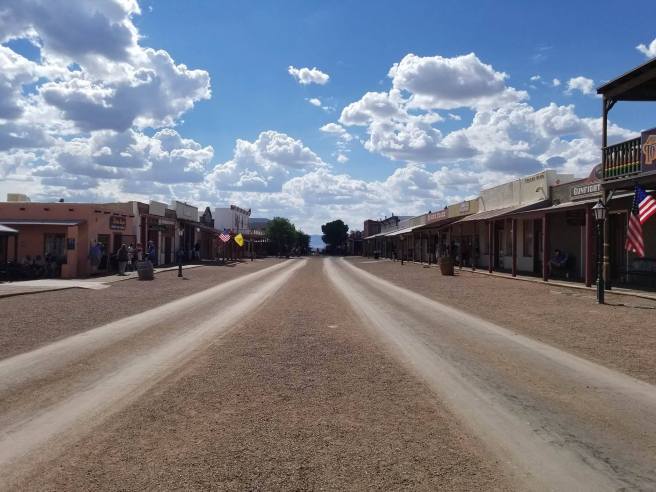 After an incredible week of seeing nature, meteor craters, and high scale shopping districts, the final element to my tour of Arizona for my visiting girlfriend was to show her a true wild west town. I’ve always been in love with western towns, cowboys, and saloons, and I was always surprised meeting people who weren’t from the west with their disinterest in the subject. I always wondered why I had such an affinity for the rustic setting of the wild west, and I realized that I had spent my childhood visiting old ghost towns and vintage areas. My family and I figured then to show Emily the town of Tombstone, which is arguably the most famous western town, having multiple movies named and made after it. We buckled up, hopped in the car, and made the trek down to Tombstone.

Right off the bat, we were smitten with how well preserved this old-timey town was. Dirt roads, wooden floors, and horse wagons made up this charming little western town, and I couldn’t help but capture as many pictures as I could of the town in action with the beautiful (scorching) blue skies above us. 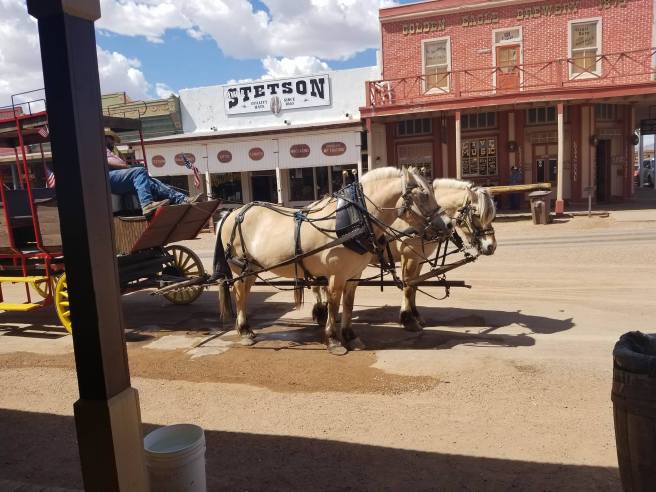 Even more charming were old-timey street performers and historic recreations of old shootouts in the town that really tired the entire aesthetic together. It’s crazy to think about how many people actually died in towns just like this in shootouts due to gambling debts, robbery, or adultery. 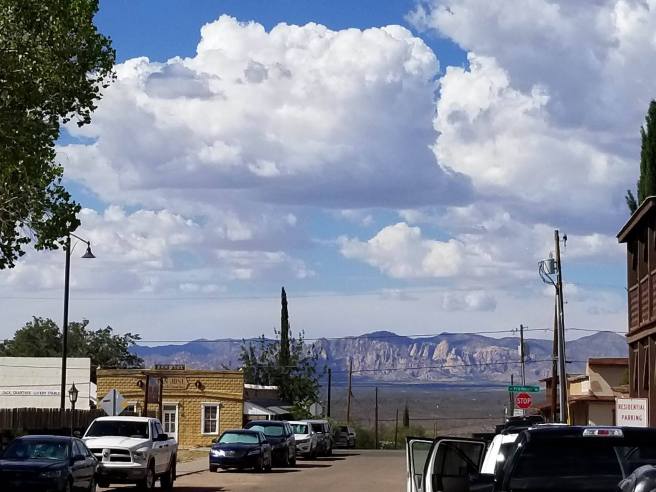 If you end up in Tombstone be warned, as much as you want to focus on what’s going on inside the buildings, and you’ll probably want to if you want to get some much needed AC, the outside is just as, if not more beautiful to stare at, so be sure to check it out.

Town Too Tough To Die

Aside from the general aesthetic, I was amazed by how cool the old town architecture was in this town. I adored the way the old courthouse looked, being the largest structure in town by far, which makes sense. There’s a parking lot right near by it that’s only $3 and is right next to the part of town that you’ll want to explore.

A must-see in Tombstone that we checked out was the Bird Cage Theatre. Both incredibly old and incredibly haunted, we took a tour of the inside of this historic and old-timey locale. Western cowboys and miners got their kicks watching shows on the stage, or got their vices filled downstairs at the gambling tables or in the bordellos. It was really neat seeing all these areas set up, and realizing this is all people had to do for fun back then.

To eat, we stopped off in the Crystal Palace, although any of the local saloons and restaurants are great to stop in. Practically every place has some great burgers, steak, or sandwiches, and you can’t visit the west without partaking in a cold beverage at a saloon. Of course when Emily and I saw the Longhorn Restaurant we had to take a pic and rep our horns, we were wearing burnt orange after all.

One of my favorite places that we stopped by was the Tombstone Epitaph, an old paper set up in the town of Tombstone. It was really neat seeing all the original equipment used to create a paper in the wild west, and how much work really went into journalism before we had massive skyscrapers in New York or digital publishing like today. 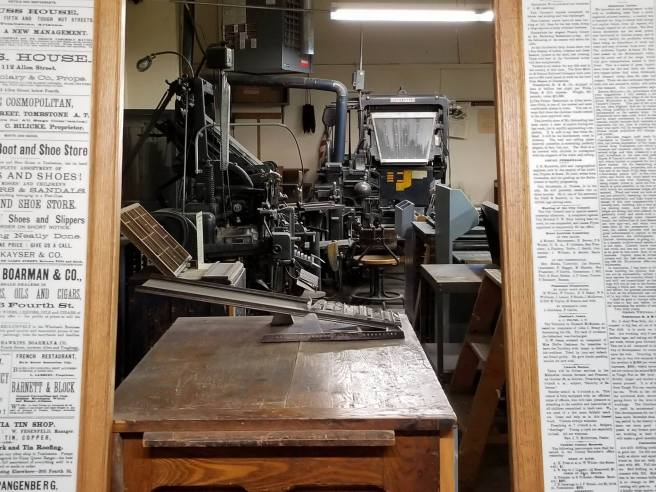 It’s worth going inside the museum of the newspaper, because not only is it free, but you can see all the equipment first hand. Also lets you see pictures and articles of old and important members of the town’s history. Makes you realize that if people had to put half as much effort into reporting and publishing as they did back then, maybe we wouldn’t have all the Fake News issues we do today. Simpler times and all that.

Ain’t That a Kick in the Head

The first stop for us, but what should typically be the last stop for people is the Boothill Graveyard. It’s only a few bucks to get in, and you get to see all the figures you’ve just learned about in Tombstone in their final resting place. People of all colors and backgrounds are buried in that cemetery, and I think  it really sums up something I really enjoy about the west.

The West offered something unique to a lot of people of a lot of backgrounds. Whether you were Chinese, Black, Irish, Jewish, or a poverty born female, you had a chance to make it out west. Instead of the well established cities in the east and especially the north, all the prejudice and difficulties that people would’ve faced because of their backgrounds were erased and instead all people equally suffered in the harshness of the frontier. People did whatever they could to make cash, and people could get rich quick, but die even quicker.

People died fast back then, and there were so many people dead at 30 for so many reasons. Hanging, shooting, poisoning, and disease were so commonplace in the west, you’d wonder why people tried. If you looked further though, like at how much successful businesses made and the fact that people who played it smart could live to their 100’s, pioneering made a lot more sense. Just being around these brave people is such a crazy experience and I highly recommend it.

If you haven’t been to Tombstone, I insist you do. The cute atmosphere alone makes the trip, but add that with the well preserved buildings, the history that oozes out of every crack, solid food, and kind locals and you have yourself a great location to visit. 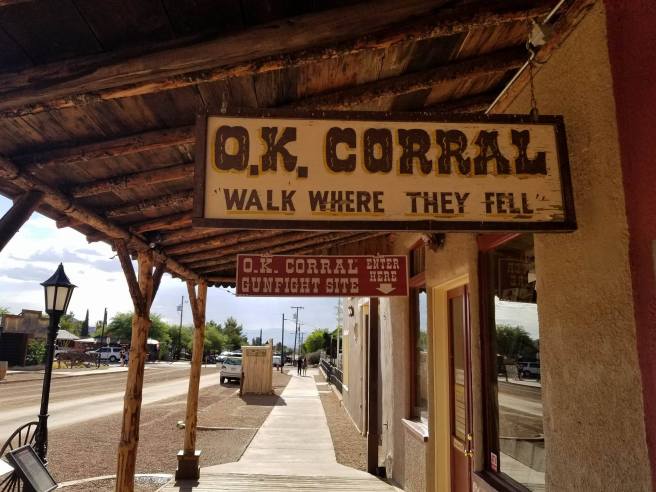 Do yourself a favor and make sure you watch some films about this place before you visit too, makes you have a deeper connection to the areas and the people and lets you have a feeling of, “Hey it’s that person/place/thing!” This town oozes charm, and it’s a fairly cheap way to get a good historic fix in. If you’re looking for a way to get a feel for what the wild west really felt like, make your way to Tombstone, Arizona. My girlfriend loved it, I loved it, and I bet you will too.

One thought on “Showing My Girlfriend the West: Tombstone, Arizona”