Much to everyone’s surprise, current Vice President and former Indiana Governor Mike Pence left the Colts vs. 49ers game he was attending early today, claiming that he wasn’t going to support an institution that disrespected our nation and our flag. While the media quickly caught on that this decision had PR stunt written all over it, the question remains, was Pence’s move effective or redundant? Personally, I think that Pence’s decision to leave the game, no matter who planned it, was one of the smartest things the VP could’ve done, especially considering the role the VP takes in modern times. Considering that Trump and Pence ran on an America first platform, taking a bold and public stand against the unappreciative millionaire athletes who have been kneeling is incredibly powerful and wide reaching. Not only does this make Trump look good without the president physically having to take any action, but it also let’s the Vice President get payback of sorts to all of the Hollywood and Broadway elites who have used their platforms to chastise and demean the VP in the past.

Some interesting polls came out today that showed just how unpopular the NFL has really become in the past month, now that team’s have started kneeling and taking political stances in mass. Check out the poll results here: 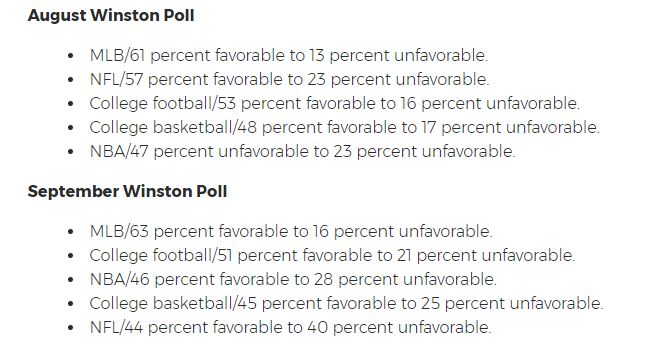 This incredible drop in favorability is directly tied to the way players handle themselves on and off the field, and no matter what the disconnected media wants you to think, the American public seems to agree with the sentiments the President expressed just weeks ago. Notice, funnily enough, that the sport that has maintained the highest position in the rankings is baseball, which seems to be chastised the most as “irrelevant” and “boring” by mainstream media. It seems that it isn’t just in news and politics that the mainstream dinosaurs are out of touch.

Also of note here is that the President didn’t just win on the athletic front today, but he also won against Hollywood. Harvey Weinstein, a massive Hollywood mogul, Democratic donor, and sexual predator, was officially fired from all of his positions today, earning himself universal shame and banishment from the filmmaking community. The fact of the matter though is that Weinstein wasn’t the single fox in a pen of chickens, but rather the lone fox that got caught and chastised for his actions. Knowing that his brother, partners, donation recipients, and basically all of Hollywood knew of his lewd behavior and said nothing this entire time, essentially condemned the entire industry in the average citizen’s eyes. For those untainted by the decaying moral standards of the mainstream, Weinstein’s actions being revealed were less shocking, and more definitive proof for what we’ve known all along. In this sense, Trump’s two most vocal opponents have been vanquished by their own behavior, and our President gets to bask in his supporters approval and continue working on fixing the nation.

Like it or not, but part of Trump’s job in “Making America Great Again” is reclaiming popular culture, or at least aspects of it, for the average citizen. No longer should publications normalize deviant behavior and push blatant lies, no longer should athletics and entertainment be tainted with uninformed political opinion and propaganda, and no longer should young Americans be exposed to such a toxic culture when they choose to entertain themselves. The reason we see the mainstream hate Trump so much is because he continues to play their own game against them, exposing them to the light and revealing them to be the ugly, immoral trolls that they really are. No matter the taxpayer cost, I applaud the Vice President’s decision to effectively boycott the NFL today, all while respecting the flag, our nation, and those who risk their lives to protect it. Just watch, should Trump and his posse keep this up, we’ll see him in the White House again come 2020.

0 comments on “Was Mike Pence’s NFL Exit a Smart Move?”