Instead of chasing after a major news story today, I wanted to highlight, and possibly contextualize a trend occurring in the media landscape right now. To preface, I am a free speech absolutist, believing that anything can be said in any forum, and no speech or form of expression should be censored or impeded on by governments in way. That being said, I am also an ardent defender of free markets, believing that businesses, services, and consumers have every right to control, curate, and support whatever speech and expression they see fit. While in the modern era, this often leads to media and tech businesses firing folks and censoring speech in the name of political correctness, we’ve already been seeing a natural market correction in both of these regards, as people flock to support offensive or contrarian content and politicians that represent these ideals. The most important thing here is that governments really should stay out of regulating these platforms as one era’s moral progress can be the same tools used to censor legitimate expression later on, which looking at nations like Britain, we can see the extreme outcome of this mentality.

The first example of this I want to point out is what happened to comedian, TV producer, and failed politician Roseanne Barr. Her rather public case is a perfect example of speech on public platforms gone wrong, and the immediate negative effects it can have. For those unaware, comedian Roseanne Barr recently revived her extremely popular family sitcom titled Roseanne. The show produced a small season on ABC and got a lot of immediate publicity as Barr publicly endorsed President Donald Trump during the PR tours for the show. People questioned Barr’s reasoning for constantly supporting Trump during these appearances, as Barr has not only run for office as a Green Party candidate, but she seemed to only enjoy the incorrect political nature of the entire Trump admin. Whatever the case, the public had their eyes close on Barr and her show, and for a while all seemed well, as Roseanne topped ABC’s ratings and got positive reviews from all watching. Then on May 29th on this year, Barr typed out a tweet comparing Obama advisor Valerie Jarrett to the offspring of “the Islamic Brotherhood and Planet of the Apes”. This of course did not go over well, and the mainstream media, as well as the social media ecosystem lost their collective minds, labelling Barr a terrible racist. It wasn’t long before people petitioned ABC to drop her show, citing her support for Trump and her subsequent questionable behavior as all proof of her horrible racism and bigotry. ABC responded immediately, giving into public pressure and cancelling her show, and dozens of online figures got millions of online brownie points for taking pot shots at the formerly beloved comedian.

After the situation calmed down, and facts began to circulate, the situation got rather murky. While it wasn’t a good look to refer to Jarrett as an Ape (even though the photos Barr chose were similar), Roseanne has since come out and defended herself saying she didn’t even know Jarrett was African American when she made the statements. Further, Barr has blamed a combination of stress from producing the show, as well as her age and her use of the sleeping aid Ambien for her series of deranged tweets earlier that day. Many free speech advocates and folks from the political right have defended her, and criticized ABC for cancelling her show so quickly, while the American left and mainstream media see her punishment and public scolding as yet another scalp in the name of social justice. In interesting news, ABC just announced today that there will be a spinoff to Roseanne coming out in August, created by the same crew and starring all of the same cast, except Roseanne Barr of course. The media saw this removal of power as the ultimate punishment for Barr’s behavior, and many can’t help but feel weird, yet still unsurprised, at how harsh of a reaction there was to Barr’s rather harmless tweet. While some debate if the crime matches the punishment, many others wonder if there was any transgression committed at all, but of course all nuance gets lost in this landscape, a lesson Barr herself should have already known. 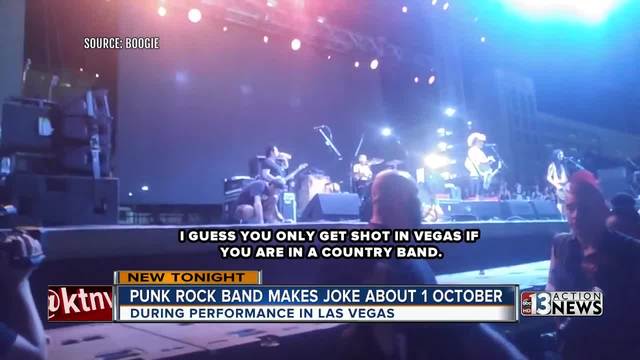 The less reported on, but equally important example to look at is what happened just recently to the punk band NOFX. For context, NOFX runs on a schtick of being incredibly offensive, and perpetuating the uncomfortable, challenging, and politically incorrect behavior that one could expect from a band led by a man titled “Fat Mike”. While the band has a long history of criticizing politicians, satirizing minorities, and encouraging violent behavior, they perceivably crossed the line at a recent concert. On their most recent tour, the band did a show in Las Vegas, where both Fat Mike and the drummer made comments about the Vegas shooting from last October, claiming that it, “was a good thing that it was country fans and not punk fans that were shot at”. What to the band was just another way to get a desired negative reaction from their audience, was actually a very sore nerve to strike with a city still recovering from the trauma of the horrific attack. In this case, the alcohol sponsor of NOFX’s music festival (which was created and headlined by NOFX themselves) threatened to pull funding and cancel the entire event if the band didn’t back out of the tour and apologize. 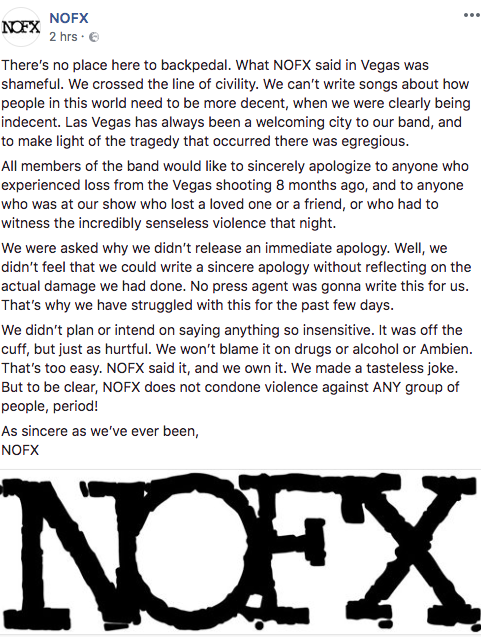 What makes this case interesting is that NOFX not only followed orders and backed out of the tour, but Fat Mike took to social media to complain about the situation, apologizing rather sincerely for his comments, and pointing out that the band has been banned from playing any shows in the U.S. for the remainder of the tour. Even critics of Mike’s comments took slight pity to the irony of the entire situation, and the schadenfreude to me lies in that the same band that makes social media posts mocking Muslims on planes and thrive off of discomfort go down due to a throwaway comment at a live show they themselves created. Now, the band will have to continue their touring efforts in Europe and abroad, as smaller acts fill in for them on a festival titled after NOFX’s own fifth album.

How to Navigate the Minefield

Hopefully you can see the similarities between these two cases, as popular artists in their own fields rose to fame through pushing the boundaries and being politically incorrect, yet found complete destruction in the modern online landscape. Once the nuance is analyzed, it’s understandable to see where these artists made their mistakes, and even more so, it’s clear that all of them are deeply apologetic for their statements, despite the fact that they didn’t mean for them to be so offensive from the outset. The important thing to realize here is that anything and everything can and will be held against you. Statements in public, and made on social media are binding and permanent, and anything from your past can be brought up and recontextualized in order to add fuel to your respective fire. While both of these artists were successful and built audiences through being offensive, their current ventures relied on sponsors and corporate overlords to support them, which was a major mistake. Online figures that thrive on offensive content these days (like hilarious comedian Owen Benjamin), have been able to pay the bills by relying on direct fan support, through platforms like Patreon, Paypal, and the sort. By having a fanbase that sustains the artist and believes in their content, the artist can actually be emboldened to double down on the testing of social boundaries that made them so likeable to begin with. This can lead to some awesome content, namely the stuff that folks like Steven Crowder and his team put out.

The drawback of this modern media landscape though is that the general mainstream audience remains oblivious to the content that pushes boundaries. While your local cinema or MTV or even early YouTube all acted as popular forums where all sorts of opinions could be expressed, almost all mainstream options these days represent a sanitized and politically correct landscape. This has the negative effect of causing the general populace to shy even more from socially dangerous content, and leaves both artists and their audience feeling segmented and isolated, further cast off into their own tribe. These issues are definitely a side effect of modern technology conflicting with our differing and flawed views on speech and expression, and the conflict we see is the market’s messy way of determining who wins out. While I’m optimistic, as I see more and more people lose faith in the mainstream news media and embrace alternative forms of content, I worry about the void left behind where moderate discourse and fair debate used to take place. Take heed and learn from what happened to Roseanne and NOFX, and realize that in the short term what society finds entertaining and what they find offensive are not the same thing at all. Learn what hills are worth dying on, and make sure that if you say something publicly, that you not only mean it, but you’re willing to stand by it, because you never know when you’re going to have to defend your values on a very large stage.

2 thoughts on “Free Speech in Art: A Look at How One Slip-Up Can Lead to Doom for Artists in 2018”