Denizens of the Internet have surely heard the horrifying news from this Monday that InfoWars, and several of their related pages and shows have been removed from major social media sites including Apple, Spotify, Facebook, and most notably, YouTube. The controversial Austin, TX based news group has been pushing boundaries for years now, angering authoritarians on both the right and left during the Clinton, Bush, and Obama administrations. While their truth seeking journalism grew a large fanbase through their radio shows, documentaries, and websites, they’ve gained massive attention these past years by expertly using social media to amplify their voice and grow a global audience. While over a decade ago, InfoWars’ founder Alex Jones was being forcibly removed from a press pool for calling out then Governor George W. Bush in public, thanks to his probing mind and open platform, Jones got to interview now President Donald Trump on his show after Trump won the presidency. Since then, the left dominated Silicon Valley tech companies seem to have been slowly chipping away at InfoWars’ presence on their platforms, implementing shadow bans and censoring their content. While this outright (and obviously planned) removal is shocking, what is more worrying is what this means for the future of discussion in politics.

A Track Record of Fake News

Something that cannot be ignored is the horrible hypocrisy that mainstream sites like CNN and the New York Times are committing, in supporting the censorship of InfoWars and Alex Jones. In every think piece labeled as actual journalism that has been put out on the topic, the two recurring reasons that support the censorship are merely that InfoWars is biased and that InfoWars has misreported stories and/or push conspiracy theories that don’t have evidence to back them up. Let that sink in. A publication like the New York Times, who in its century and a half existence has probably published enough objectively false and obviously biased reporting that tomes larger than the Bible could be filled many times over is criticizing a site for bad reporting. Alex Jones is blamed for questioning whether or not the U.S. government aided in 9/11 or whether or not they commit false flag attacks on their own people in order to gain more power, which if you’re wondering, declassified reports have confirmed the government has indeed planned to commit such acts in the past. Meanwhile, WashPo, NYT, CNN, and many more all pushed Bush-era lies of WMD’s, and has kept/continues to keep the American people in the dark on vital foreign policy information, supporting seemingly endless conflict abroad with no oversight or morality.

Much like the obvious defense of Fox News when it is called out for being right-leaning (why can’t the American Right have at least one outlet?), why is it taboo for more libertarian leaning Americans to have a news site that leans towards distrust of government and the extreme protection of America’s founding liberties? I’ve mentioned previously on this site that modern journalism schools teach their students that a journalists job isn’t to report the news, but rather to tell the public how to interpret and feel about the news. Understanding this, it is clear why the mainstream hates InfoWars and all that it stands for, a site that promotes truth seeking, free will, and rejection of authoritarian rule. What is worth looking deeper at is what effect this has on our society going forward.

An Endless Game of Pong Something important to understand is that yes, a monolithic company like Facebook does indeed have the right to censor InfoWars off their platform. Every company banning Alex Jones and crew did it in the right way, claiming that InfoWars was and has been violating all sorts of terms and policies of these platforms, and that banning them is an appropriate form of reprimand. What they don’t understand though is that their fib about InfoWars being dangerous is actually harmful for society. Whether you like it or not, InfoWars is not a fringe group of insane whack jobs, writing lies 24/7. No matter what left or right wing journalists want you to think, InfoWars isn’t exclusively listened to by tin foil hat wearing hermits. In fact, InfoWars has a rather large reach, and a lot of their audience is comprised of folks with the same mindset that draws people to alternative news platforms like the Rubin Report or the Daily Wire. It’s been rather annoying watching right wing outlets reluctantly support InfoWars through their censorship, as if those who watch the Ben Shapiro Show are somehow more erudite and refined than an Alex Jones listener.

The point to be made is that now that social media sites have pulled the trigger on InfoWars, they are now saying that anything like InfoWars is officially too taboo for general society. Millions of young people get their opinions from what they can find on Facebook and YouTube, and if all they know about InfoWars is that they were banned for being false and offensive news, then they’ll believe that. Those that know how ridiculous that is are only going to be further isolated from mainstream culture than they already probably are. The obvious problem then is what comes next? For every poor soul brainwashed by Marxist university teachings, claiming that the fear of continuing censorship is merely succumbing to slippery slope fallacy, I ask you to remember when Hillary Clinton called Pepe the Frog “hate speech”. I ask you to remember when shadow banning was supposed to just be a myth. I ask you to remember when gay rights activists promised that the social conversation would never progress to trying to normalize pedophelia. It is clearer than ever that journalists, politicians, and activists are trying to create their own world with their own rulebook, creating chaos and destruction out of what was once order and peace. There’s really no way to discuss these events without sounding like Alex Jones, who to his credit has been warning about these very outcomes for years.

Cut Off Your Nose

It’s impossible sometimes to not feel pessimistic when events like these play out. It might sound strange, but there continues to be a silver lining though, even with all the chaos. While it’s horrible that InfoWars was censored off these platforms, which could possibly lead to more and more censorship of the right, conservatives and libertarians have been begging to switch platforms for ages now. Ever since Facebook and YouTube started flexing their biased political muscles publicly, people have been yearning to get off of these soul draining and clearly corrupt systems. The problem has been that these platforms are so effective, and have such large numbers of people on them, that like a black hole, it feels impossible to generate enough acceleration to escape. Ironically, by kicking InfoWars off their platform, much like when comedian Owen Benjamin was banned off Twitter, or when senate hopeful Austin Petersen was banned off Facebook (and Twitter), the people who already support these figures only dig in and get more emboldened. InfoWars really doesn’t need YouTube to survive as a platform, an uber successful website with advertising, a merchandise store, a famously mocked line of health products, and much more will continue to keep the site alive. InfoWars provides value to people’s lives, which is why it is impossible to kill. It’s almost as if people don’t recognize the very name of the site: INFORMATION WARS, and all of the irony that goes into trying to stop them by censoring information.

While cutting off InfoWars from these major platforms certainly won’t kill any of them, I think this was hands down the major misstep that will ultimately spell doom for them. All YouTube has to do is ban Steven Crowder, or Ben Shapiro, and the outcry would be deafening. Attempts to even shadowban someone like Jordan Peterson have been met with utter contempt, and now these platforms are backed into a corner. If they continue this attempt to call anti-leftist views as fringe and offensive, then the push back could ultimately kill their platform. If they do nothing about it, then they are “enabling” the very content they’ve been campaigning so viscously against, but said content will get so powerful that any further attempt to censor will be met with greater outcry. 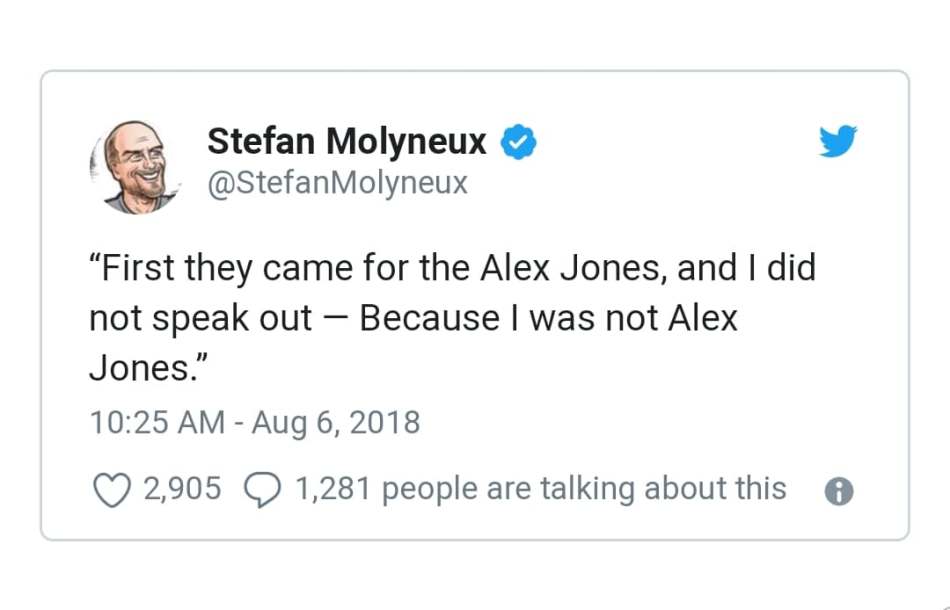 Don’t mistake what happened to InfoWars as anything but a disturbing power play, acted out in the form of censorship. Unfortunately, alternative media does what it does best, and continues to fight amongst itself, arguing over whether or not censoring InfoWars was justified. Alas, even great minds are human, and passion often leads to conflict. The important thing to remember is that no matter how the numbers in the economy look, or how well the Republicans do or don’t do in the midterms, politics runs downstream from culture, and there’s a clear stranglehold on our culture from a very specific group. InfoWars will continue to fight the good fight, but we all have to as well. Culture wars are won through attrition, and if you don’t think that your beliefs are next to be attacked, you are gravely mistaken.

2 comments on “Shocking: InfoWars Censored Off Every Major Social Platform”