This article by Ryan Smith was originally published at CoinCentral.com

The heyday for mining established cryptocurrency has all but come and gone. These days you seriously need to know what you’re doing if you want to compete with the big boys. Industrial-scale operations have driven many enthusiasts to look for opportunity in smaller coins in hopes of catching the next big trend.

We’ve covered cryptocurrency mining in quite some detail previously on CoinCentral. However, we thought it was about time to see how two cryptocurrency heavyweights stack up in the mining department. This is Bitcoin mining vs Litecoin mining.

Before jumping into the differences, here are some important cryptocurrency mining factors to consider if you plan on getting your feet wet:

Specialized mining hardware is designed to run at the limit and, as a result, uses up a lot of electricity. It’s no surprise then that the greatest number of miners are found in countries with cheap electricity. These machines also run particularly hot and cooling your precious equipment becomes an issue in warmer climates.

To stay competitive you need to have the latest hardware and software. Furthermore, you need the expertise to ensure that your rig is working at optimum capacity. Investing in mining equipment also means putting in the time to educate yourself. Finally, it’s important to consider all the fees associated with mining on either the Bitcoin or Litecoin blockchain.

Let’s Shake on It – Coming to Consensus

Both Bitcoin and Litecoin use proof-of-work to validate and secure transactions on their networks. Bitcoin uses the SHA-256 algorithm to achieve this. The secure hash algorithm is a function which is commonly used in blockchains and was pioneered by Bitcoin.

Bitcoin mining is considered more complex than Litecoin mining because of the algorithm differences. Over the years more and more computing power has been committed to securing the Bitcoin network. As a result, the Bitcoin mining difficulty has increased dramatically until the present day.

Bitcoin was designed to confirm transactions at around 10-minute intervals. And to keep this time steady, the difficulty has increased so that more computing power doesn’t upset the predictable transaction speed of the network. Unfortunately, this also means that unless you have the latest hardware you’re probably going to have a tough time turning a profit in this market.

Mining hardware has evolved from your basic desktop processing into specialized chips called ASICs. The application-specific integrated circuit was designed purely for cryptocurrency mining. ASICs don’t come cheap however and a top-of-the-range bitcoin mining rig can set you back a couple thousand dollars.

GMO recently announced Japan’s first Bitcoin miner, the B2, which sells for a cool $2000. GMO is challenging Bitcoin mining leader BitMain head-on with the B2. CEO Masatoshi Kumagai recently had the following to say about their controversial competitor:

“I respect Bitmain, but we will top them”

You’ll want to stay abreast of the latest developments in the hardware race and ensure sure you have the right equipment when you need it.

In comparison, Litecoin uses the Scrypt algorithm instead of SHA-256. It was initially designed to be ASIC resistant to prevent the kind of mining centralization we are currently seeing in proof-of-work blockchains. However, with dedicated research and development, established miners have regardless been able to build specialized hardware specifically for mining Litecoin.

A major advantage Litecoin has over its bigger brother is the 2.5 minute transaction time. At 4x the speed of Bitcoin, it seems like Litecoin would be more of a contender for merchant adoption. Both coins, however, have probably lost that edge to near-instant transactions from newer contenders.

2.5 And 10 minutes respectively are excellent transaction times for wire transfers, both local but in particular international transfers. A traditional international transfer through the existing banking system can take anywhere between a ridiculous 7-10 business days to confirm. Keep these kinds of use cases in mind. As cryptocurrency adoption grows, the best mining opportunities will take place where it makes the most sense for users.

The best Litecoin mining rig out there at the moment is probably the Antminer L3++ from Bitmain. We are currently in a tricky market as the fall in cryptocurrency prices has made mining unprofitable for many smaller miners. Any investment made today should consider the longer-term price chart of Litecoin. Your preferences may differ so always make a point of doing your own research.

In proof-of-work cryptocurrencies, if a miner achieves > 50% of the network hash rate (amount of computing power committed to the network) they have the ability to stage a 51% attack. This basically allows the miner to steal money from the network by double spending.

Such an attack would initially be very profitable for the miner. However, the network would ultimately become unusable and coin holders would move their funds to a safer blockchain. An interesting cost estimate to initiate this kind of attack for several blockchains can be found here.

Mining centralization remains a concern for Bitcoin as Bitmain continues to dominate the market. If Bitmain is ever able to capture more than 50% of the network hash rate, any Bitcoin mining equipment you hold is going to lose value very quickly.

In terms of Litecoin’s position on security, Charlie Lee, the founder of Litecoin had the following to say in a tweet earlier this year (2018):

In the beginning, just about anybody could mine Bitcoin with a stock-standard computer. Then, shrewd miners saw the immense profits that could be made via mining. These days companies have dedicated research and development teams and put large budgets in place to stay on the cutting edge of cryptocurrency mining tech.

Fortunately, there is a solution if you’re a smaller fish in this rather large pond – mining pools. If you took the leap and invested in some reasonable hardware you now have the option of contributing your hash power to a group of miners known as a pool. Both Bitcoin mining pools and Litecoin mining pools offer their respective miners a lower barrier to entry to mine. The shared power of the pool allows you to collect your reward in proportion to your power contribution.

The major advantage of this approach is a regular payout on a predictable time-frame. The major disadvantage, however, is that you are concentrating power to the pool’s owner. This is centralizing the network, even if only by a fraction. The beauty, of course, is that you can move your hardware to another pool if you don’t like what your current pool is about. 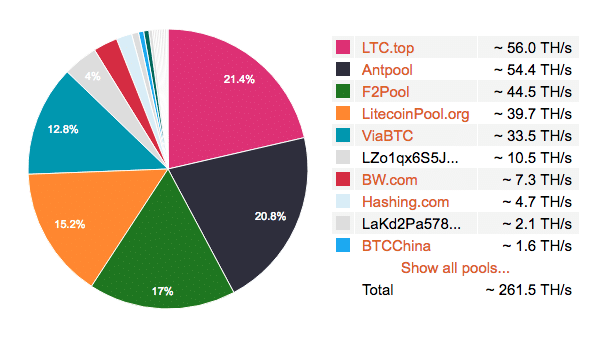 And now to the section you’ve no doubt been waiting for! So, which is more profitable, Bitcoin or Litecoin mining? Well, at this particular snapshot Bitcoin was well in the lead. There are, however, so many factors to consider in such a calculation that it’s recommended you approach this with a healthy grain of salt.

Coinwarz provides an interesting real-time comparison of the most profitable coins:

These calculations focus almost entirely on hash rates. Other factors to consider include exchange rate fluctuations, pool efficiency, fees, changes to the code and so on. Finally, it’s worth noting that monitoring the tables here and at other sites should give a better representation over time. Monitoring data for just one day is not particularly reliable.

Making the decision to jump into the world of cryptocurrency mining is not an easy one. That kind of decision effectively means competing with large-scale operations around the globe. It definitely pays to get involved early in the launch of a new coin. However, the market has quickly become saturated with so many useless cryptocurrencies it has become a lot harder to know which will succeed and consequently where to commit your resources.

Bitcoin and Litecoin mining is still feasible if you are prepared to invest in the right hardware and software and dedicate those resources to a mining pool. With so many choices and so many factors outside of your control, it appears though that the probability of turning a good profit gets harder by the day.

A healthy debate continues in the cryptocurrency community. The general feeling is that those passionate about cryptocurrency, the hardware, and the technical chops to make it happen will do just fine. Those with pure investment goals would probably do better by buying the coins outright.

This article by Ryan Smith was originally published at CoinCentral.com