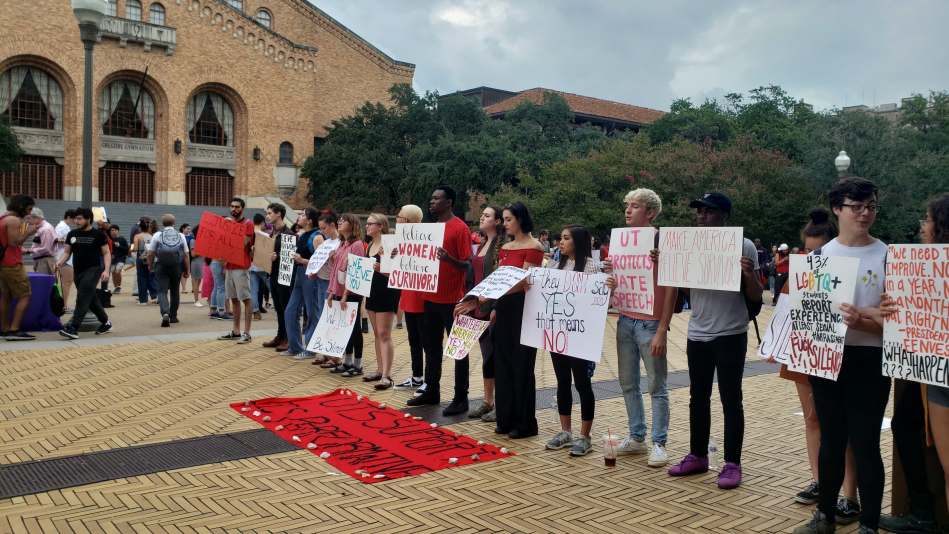 UT students have staged an anti-Kavanaugh protest on campus, calling it the #StandWithSurvivors protest. This comes less than a week after the infamous sign tearing event that also occurred on the Austin campus. Speedway, a major road that runs through the university is being blocked by the protesters, as they gather in a circle and a series of guest speakers lecture about the Republican party, Donald Trump, and sexual abuse.

So far the protest has been fairly tame, with a few major highlights. The first guest speaker endorsed Robert “Beto” O’Rourke, and told protesters to go register to vote on campus and to vote out Ted Cruz this November. This was met with a wide applause, and several students called Cruz a Zionist. Notably, one of the event organizers seems to be wearing an outfit that indicates her membership within the Palestinian community, and has multiple times used the word Zionist as a negative word. Socialists on campus have also been handing out fliers, trying to recruit students for their marches.

Protesters are bragging about shutting the Lamar Bridge during ACL this weekend. Speaker tells students to start protesting more, to start breaking and destroying things, and to get arrested. Watch video below for more.

Rain killed a lot of the momentum of the event, ruining the signs, and forcing the students and protesters to huddle for cover. The event organizers remain and chants persist, but the student bystanders have mostly moved inside for cover.

The rain killed much of the protests momentum, with several student speakers continuing to support Senate hopeful Robert O’Rourke, and blaming Texas Senators Cornyn and Cruz for their votes supporting now-Justice Kavanaugh. As of 5PM, the police have packed up their barricades, allowing traffic to pass through campus more freely once again.