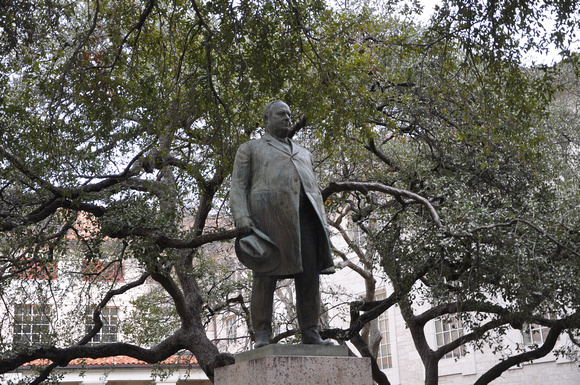 UT continues to put social justice and revisionist history before truth and tradition.

According to UT’s paper, The Daily Texan, President Greg Fenves announced on Monday that the statue of former Texas governor James Hogg will be returning to the campus. The statue was originally removed in 2017, along with five other statues that represented Texas or southern history on UT’s South Mall.

The statues were removed in the middle of the night, as to avoid any backlash for the decision. According to the Texan, since the removal, three of the statues with Confederate backgrounds have been donated to the Dolph Briscoe Center for American History. The Hogg statue however has remained in limbo, as administrators decide what to do.

Upsetting to many is the fact that the statue of Hogg was only removed due to its part in the six statue instillation, which many saw as a case of throwing out the baby with the bath water. A statue of former President Woodrow Wilson suffered a similar fate in 2015, when UT took down the statue of Confederate president Jefferson Davis from in front of the main tower.

Unsurprisingly, the instigating factors behind each round of statue removals have been related to increasing racial and social tensions in the U.S. at large. The statues of Davis and Wilson were removed after the 2015 Charleston church shooting carried out by Dylann Roof, and the six statues on South Mall were removed after the infamous tiki torch rally on University of Virginia campus.

Despite these events having nothing to do with UT’s campus, or the specific meanings behind each statue’s presence on campus, UT President Greg Fenves has capitulated to the pressure of social justice minded activists that have been suffocating Austin this past decade.

Hogg’s children were large donors to the University of Texas, and Hogg himself is important to Texas history. The fact that his return is likely to be contested, and will only be allowed under the stipulation that his mixed policies on segregation are somehow mentioned is emblematic of the larger issue at play.

UT’s administration is incapable of standing up to its student body, which is radicalized and made ever more ravenous by the very staff that are hired to teach there. Texas legislation requires that every student at the university take a certain amount of government and history credits, and the courses being taught are heavily steeped in Marxist thought, anti-American rhetoric, and an angle of revisionist history.

Classes teach that the founding fathers were racists concerned only with preserving slavery and their own wealth, that America is a war mongering empire obsessed with spreading white supremacy across the world, and many other things that have been highlighted by various sites these past years.

With students being exposed to content like this, it is no wonder that UT has such a ravenous student population, eager to rid their campus of any marker of history that was made before them. No room is left for nuance or debate, but instead a “my way or the highway” approach is taken in every case.

This was clearly highlighted with multiple protests that took place on UT’s campus in response to conservatives attempting to display their own opinion. The Young Conservatives were swarmed and had their property vandalized and Turning Point USA faced a similar fate. Fenves’ response to this behavior was that both sides were responsible in making the campus climate hostile, and offered no other response, refusing to place blame on the clear perpetrators.

I wrote last year that I wouldn’t be surprised if the George Washington statue was next in line to be removed, due to his owning of slaves, and murmurs that he was the next target of social justice. While the reinstating of Hogg makes me think this won’t be the case, we might end up seeing UT’s student government taking measures to highlight Washington’s history as a slave owner. Student body vice president Mehraz Rahman told the Daily Texan that,

Ironically the current student government was the less radical option for UT, with president Colton Becker and vice president Mehraz Rahman offering a more measured platform compared to the identity politics heavy one used by their competitors. It seems that it doesn’t matter who is in office though, as the slow creep continues to overtake any remaining history on campus.

Don’t take the handling of these statutes lightly, they are far more than just figures made of bronze that adorn the university. Every time one is removed, the activists that pushed for their removal see it as a direct victory in their attempt to erase and replace America’s history.

This was clearly shown in UT professor Anne Lewis’ most recent documentary. I covered a screening of this documentary and shared footage to InfoWars, where Lewis told students that viewing the world through a Marxist lens was crucial to her job as a professor, and that she couldn’t separate her identity as a Communist from her film-making. Notably, her documentary, which covers the Communist and labor movements in Texas, ends with the removal of statues from UT’s campus.

This is highlighted as a victorious moment for the Marxists of Texas. Let that sink in, and keep it in mind next time you see a news report on the matter. This isn’t just about statues or even college campuses anymore. It’s about our history.